These were a few of the finals from Pealann's dance class. They had to perform short pieces in small groups outside of the normal studio or performance space, in Downtown Pittsburgh.

The first one was on different levels of a Parking garage.

The second was in Strawberry Way. Will and Ryan performed this one. At first we all thought that Ryan was going to perform on his own because Will was absent, but it turned out that Will was posing as a homeless man in the ally way, which we all found out once Ryan started kicking the sleeping bag, and Will jumped out and continued in the dance.
Then as you can read here: http://www.downtownpittsburgh.com/about-pdp/pdp-services-and-initiatives/strawberry-way
Strawberry Way has built in music - Vivaldi's - The Four Seasons, plays in the background which is altered by the weather in this unique instillation.

The third piece was done in the sky walk connecting Macy's with it's parking lot.

And then there was a guy that I thought was interesting on the way back to Point Park University. 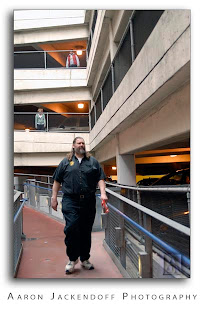 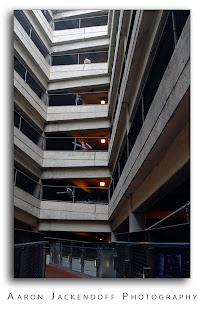 Posted by Aaron Jackendoff at 6:07 PM